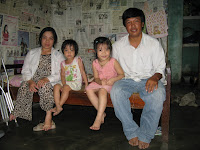 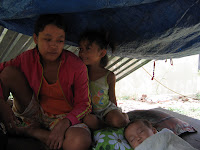 We started with helping three children whose parents had abandoned them due to poverty. Two relatives were struggling to care for them. We helped by taking on the costs of their education.

Then we helped a minority tribe community. They had poor health and very few children went to school. Their poor health was due to their poverty and inability to afford medical examinations, treatment or medicine. We helped by building a medical centre and providing free medical care and medicine. We also helped by providing school supplies for the school. (I am going there soon and if anyone wants to make a donation for school supplies that would be appreciated.)

Then we were asked to help the poorest in a northern farming community where they had incomes from $7-$30 a month....and so CEF grew and grew...

All those we helped were poor or very poor with no income or a small income. But now I am rather challenged in keeping a sense of what poverty is and who is very poor, or very, very poor and who we should help of all those very poor we are asked to help.

Now I am looking more at the subtleties. What do they own, what is the furniture made from, what do they wear, has anyone in the family got any gold jewelry on, do they own a house or have a temporary shelter, what is the house made from and was it donated, or did they save for it and build it.

A family we visited last week had a hut made from bamboo and matting and it was about 6 ft by 10 ft, had one bed only, no table or chairs, no kitchen, no bathroom, no lean-to, no bike, no motorbike and no birth certificates for their childen which meant their children were no allowed to enter school. Five family members lived there. The mother looks after the little ones and the father goes around doing odd jobs for people and earning very little money. I knew for sure they were poor. They were amongst the poorest familes we have helped.

Another family we visited had a small house with a toilet area and a kitchen area. The house had been built for them by the Red Cross. They had a bed, some boxes for storage some plastic bowls for washing, plastic table and chairs and some clothes. The mother was a garbage collector, the husband had left and the young daughter had to look after her little brother as the mother couldn't get home very often. A kind old lady slept with them at night time. I knew for sure they were poor.

We met a mother who was deaf and dumb, but very bright. We had been asked to help her daughter go to school. The mother supported her daughter and mother with difficulty as she rarely could find any employment and there was no father. They were definitely poor and we are helping the girl with school costs.

In another family the siblings were struggling to get one of their sisters through school. Both parents had died and all the siblings had stopped school except this one as they all wanted her to complete school. But still they couldn't manage to support themselves and keep her in school with the rising costs of her education. She lives in a space 8ftx8ft with two other girls. I know for sure she needs help with her education.

We have a mother who is dying of brain cancer. Her husband is ill and can earn very little and what he earns mainly goes on paid killers for the mother. The Red Cross gave them a house, but they own very little. Their daughter is bright and without help has to leave school. They are definitely poor and we help with the daughters schooling expenses.

Are they poor when the father can earn $7 a day, which is a good salary here? Based on that no they aren't. He can't work consistently as his wife died and he has to look after the two young children and often the baby gets ill. When that happens it's four or five days before he can get back to work. He has no relatives to help. As the baby is still young it is on a formula, which is expensive here. When he works the child goes into child care and costs him about half of that days salary. When the baby is ill he has doctors bills and medicine bills. He has managed to work about 2 week out of the last 6 weeks. We decided they do need some help and so we are paying for the little girls education costs.

Are they poor when they have the capacity to borrow a huge sum for paying for granny's major heart surgery? It usually means they have collateral such as a house. Now they haven't got enough money to send their daughter to school because of the high interest rate the ruthless money lenders charge. We need to interview them further and see their home before deciding if they need help.

There are the obvious cases that are easier to say no to. We were asked to help pay for school for one girl. Her father earns $5 a day has a wife and they have two children. They may be poor and struggling but that was one case that was clear. Even the person who introduced them agreed that this case wasn't urgent as they had seen some of the others we help.

I have friends working in areas of Vietnam that are even more poor than here and so it's hard sometimes to get everything in perspective. They tell me stories and it feels like the people I help are not very poor. When I visit some of those we have helped for some time they seem rich compared to some of those we have taken on more recently. They are poor, but just don't seem poor in comparison to the worst cases we help. It's hard not to make comparisons but I find it's crucial to try to take each case individually and see what is the reality. It's essential that I don't respond emotionally to dire situations as it just clouds my judgement and I always need to remember to trust my gut reactions. Then get the facts. Then see what our role needs to be with this family, if any.

In the process of knowing how to judge who is very poor, who really needs help and how it is best to help, it means I am on a sharp ongoing learning curve that is filled with challenges. It is also enlivening due to the ongoing changes and growth required on my part.
Posted by Linda at 6:19 AM