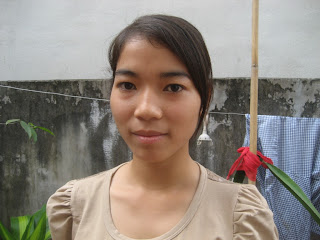 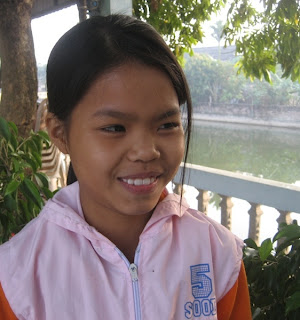 Hi, my name is Barbara and I have been a friend of Linda's for many years now and as such became a first hand witness to Lindas' passionate work in Vietnam. I personally love the idea that Linda’s support is not just generally about helping children. but specifically about helping girls as so many girls in developing and third world countries just don’t get the same attention and support as boys. In those countries it is still a widespread conviction that girls – women are only good for having children, doing the cooking, or are available to abuse; physically or sexually. They are expected to bring funds in and that means they are sometimes prostituted, sold off or sent out to beg in the streets.

Being a woman myself and having a daughter of my own it breaks my heart to realise how many girls out there fall under this very damaging judgement knowing that women can do so much more, and many things even better than men; just like vice versa.

In 2007 I took my daughter to Vietnam as it was a long term wish of mine to visit Linda in Vietnam and see first hand what she was doing and get to know the country she was now living in. It was such an eye opening experience and it definitely confirmed to me what a good idea it was to support Linda’s work. And my daughter was so inspired and so impressed that she also decided to take on a sponsor child together with her brother. So now we have 2 girls in our family we are sponsoring and every time Linda sends the updates it brings tears to my eyes to realise that these 2 girls now have a much better chance in life than they would have had without Linda.

The older one of the two is now going to University and I do hope that she really finds a way to independence which will enable her to then raise her own kids in a very different mindset to that of many others who haven’t had the good fortune to get support from someone else to better their lives. And even if she does not start an academic job, at least she knows how to write and read, she knows maths and some other general knowledge which definitely will set her up for a much better life than prostitution or begging.

It took me a while to accept that even supporting only 2 children makes a huge difference as I felt so helpless when I was in Vietnam seeing the vastness of help needed. But I know, and Linda does too, we cannot help everyone. But everyone helped is better than nothing and invaluable for those at the receiving end, and that includes the families.

Thank you Linda for your ongoing work and I hope that you will find many more sponsors to help even more girls. Maybe it is time for me too to take on the next one.
Barbara