Guest blog by Miriam about our first CEF Beach Outing 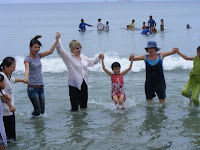 Hi this is Miriam here and I volunteer for CEF. Last year while I was in Hoi An we had the first beach day for the children. The children that are supported by CEF come from all over Quang Nam Province. There are also children in neighboring Danang province and northern Thai Binh province; but this outing was for the Quang Nam children.

We needed to organise a bus, meeting places, lunch to be brought to the beach, games and toys, sun block, drinks, snacks, volunteers to ensure the safety of the children and paid Vietnamese lifeguards. So well done to Linda; it was a big undertaking and big financial committment from an NGO. The day started with a fairly quite group who were solemnly given instructions by the VN lifeguards. 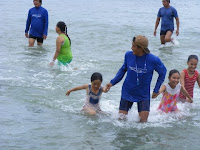 Some took to the water (fully clothed as is often the way here), but many held back in fear and perhaps wonderment mixed in. So trying to set a good example I entered the water with one of the younger girls (her parents had been lost in the floods, so she was very reticent, but not by the end of the day! I had on my long shorts and mans shirt for modesty. It was so funny to see the children struck almost dumb when the tourist walked by in bikinis; for them it was almost like seeing a naked person.

Once in the water they didn't want to come out, they did manage a couple of games, where we all cheated like mad and there was so much laughter and fun as we tried to fill water bottles with seawater without using our hands. The Kites and prizes were most popular. 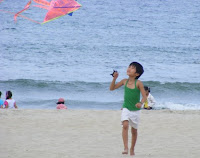 A lovely vegetarian lunch was enjoyed by all followed by a nap, but needless to say the nap was very short as most wanted to play and learn more in the sea. Some enjoyed the kites and playing on the beach. 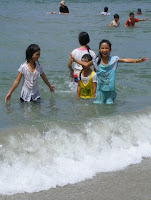 Towards the end of the day it was delightful to see those who had learned something helping the others, the comradery between the children was enchanting. To see children with so little sharing and supporting one another, to say nothing of the perpetual laughter and friendships that were made that day.

I feel as though I was honoured to be a part of this great day, I missed the one this year as I was in Australia, but I will be back for the next one!
Posted by Linda at 7:45 AM