Christmas in Vietnam by Graeme

I stayed in Central Viet Nam for a couple of weeks recently and went on several visits to the families of children CEF supports in the countryside of Quang Nam province and up into the hills towards the border with Laos. It’s delightful. Terraced rice fields, lush vegetation and hospitable people. But not a lot of work;which is why Diem’s family moved to Hoi An. Their move was made possible because mum’s granny was living in Hoi An. So they moved in with her until a small house just down the street became available, which is where we met them just before Christmas. 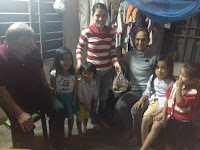 It was raining when we arrived and were warmly welcomed by the whole family. Liverpool Rotary, Sydney sponsors Diem and Rotarian Ted Mylnarz came with us.

Because the family is still registered in Dai Loc district where they used to live, they are not able to receive any help from local authorities. Diem’s father had just made the long return trip to have an x-ray and had found out that he has compressed vertebrae. He was told to come back soon for more x-rays. He can no longer work as a motorbike taxi or labourer so it falls to his wife to be the breadwinner. This all sounds pretty gloomy but the whole family are so delightful to be with you’d never know what they are facing. One of CEF’s assistants Hieu translates for us as we look at the x-ray that father has taken off a nail on the wall. He’s in pain from the sciatica and I wonder what he’ll do. Surgery seems like the best option but it’s way beyond his means. 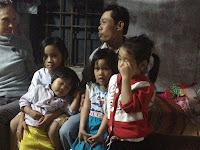 I have fun with the children videoing them and it’s with some reluctance that we leave for our next visit. 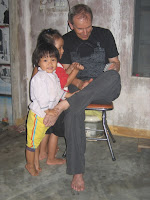 As we drive off I learn that CEF’s driver Bill has spotted an inauspicious placing of trees in the front garden and has told Diem’s mother she should move them to avoid any further problems for the family. Somehow this seems quite plausible.