Bandages from The D.O.V.E. Fund for the leper community of Hoa Van 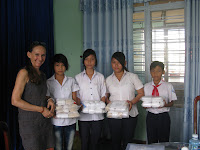 The D.O.V.E.Fund gave us a huge boxfull of beautifully hand-crocheted bandages to give to a community we work with on the edge of Danang. On the 25th June we took them to Danang to hand them over so that the they could be distributed to the 'treated' lepers from the Hoa Van community.

We met at the District People's Party office, which is also the local Vietnam Woman's Union office. The 14 children in that district in our sponsorship program were present with their parents and some of the officials from the community. Four children came forward to receive bandages for their parents who have had leprosy at some stage in their lives and who have been living for many years in the isolated Hoa Van community.

The delivery of all these bandages to Vietnam was organized by Elaine and Bruce who sponsor, and have organized sponsorships for many of the children from this community.

Elaine actually makes bandages herself. They are so finely and evenly crocheted that they are quite beautiful. Each one takes ages to make and they really are quite special when you think about the fine soft thread used and the time needed to make one.

I presented 20 of these lovely bandages to each of the four children and also gave some basic instructions on care of them. These children have a parent who regularly cuts themselves due to the numbness in their extremities. The consequences of leprosy are terrible as those who have had leprosy don't know where their limbs end as they have no feelings and little circulation in their stumps.

There is shame and embarrassment in being a leper or having a grandparent who is as there is a lot of discrimination here still. It is one reason we particularly help these children who suffer too, not with leprosy but with the social stigma of having a parent or grandparent from the Hoa Van community.

The bandages were admired when the children gave them to their parents. But some of the parents were too embarassed to ask their child to come forward and collect some for them and none of the parents would come up with their child to receive the bandages themselves. The children were uncomfortable too. It was interesting to see how big an issue this is for them all still. I hadn't seen the children like this and it brought it home to me how much they still are struggling with this unwanted inheritance.

The assistant headman and the head of the community's women's group officially thanked us and The D.O.V.E. Fund for the beautiful bandages. The assistant headman assured us the remainder of the bandages would go to each person suffering with leprosy in the community. There would be a chance for those parents too embarassed to collect any bandages at the meeting to receive some later on.

About the D.O.V.E. Fund
Their mission statement:
"To provide humanitarian and development assistance to areas in Vietnam; to provide communication, education and cultural exchanges that reflects the best qualities of both cultures. To create an environment brightened by hope and sustained by peace."

Most of the members of this American organization are war veterans. They have many good projects in Vietnam including The Bandage Brigade that made these bandages. They have also partnered with other organizations in Vietnam to build a school and provide clean water and latrines for it. they have built a medical centre and a medical clinic. To see more about their work please see www.dovefund.org
Posted by Linda at 2:26 AM