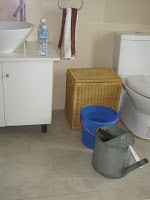 A few days ago we did home visits of the children we sponsor or are about to sponsor. We are looking for a sponsor for the little boy in this particular family as he needs to start school and it will be a year later than most children start.

This family lives in a very basic dirt-floored shack made from bamboo and other plant materials with a sheet of plastic to keep the driving rain out. They have no bathroom or kitchen facilities, or running water. Not having a kitchen or bathroom is very normal with poor families, they just cook outdoors and go out back as far as they can to go to the bathroom and do a trip somewhere to collect water. This family had a baby and a little boy, and no well or stream nearby, so I wondered where did they have go to get their water and who did this chore.

Many of Vietnam's poor have to collect water from quite some distance away drilling for water and building a well is expensive. I realized over the last few days how incredibly lucky I am to live in a house without dirt floors, and to have a bathroom, kitchen and pretty constant running water, and don't have to do an arduous trip to collect water each and every day of my life.

I don't recall ever having to collect water in the past, but do remember the water being turned off for several days at a time when we lived in Hong Kong, but we didn't have to go any where to collect water. We filled up baths and just had to be careful with the amount we used.

Now I have been collecting it for three days as there is no running water in my house. It's not a plumbing problem, but a Hoi An water problem and as my Vietnamese is not very good I just understand that the town water has been cut off as many people have been getting sick, sick enough to end in hospital and serious enough for the local government to shut it off. Evidently it had started to taste bad and smell bad. Small amounts now are being released, but with very little pressure, so it's dribbling into outdoor taps now. So I take the dishes to the outside tap in a bowl for washing. I have a watering can and a bucket of water in the bathroom. Each day I have to allow extra time for water collecting, but maybe only 20 minutes a day.

But if there wasn't a tap nearby how far would I need to go, how much extra time would be needed for water collecting? I wonder about the family we visited the other day. How many trips does the mother have to do to collect water with the baby on her hip or on her back? How much of her day is taken up with water collecting, and all year through too?

It has made me painfully aware of how much water I have been using and wasting, and now I know how much less I can use. Blessings come in many disguises!
Posted by Linda at 9:58 PM