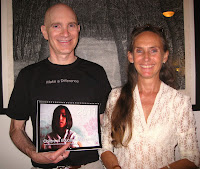 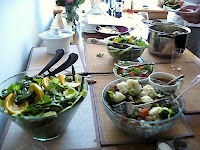 Until CEF has a fundraising team it's mainly up to me to do what I can to bring in funds and find sponsors. So feeling rested and enthused and knowing the necessity for money to help children in Vietnam to receive an education I ambitiously decided to organize some fundraising events over a fortnight.

New York summers are hot and humid and anyone who can escape to somewhere near the sea or somewhere cooler does. Some of those asked if they would like to attend were away and couldn't. But determination meant I would still forge ahead and just organize two small events.

Stephen, the USA manager-coordinator helped by inviting many friends as well as offering his beautiful spacious apartment which easily fitted everyone in. A meal was prepared and cooked with love for 14 people. Lynette a fellow Australian was able to help for some of the day which made it fun and an enjoyable experience. It was a small,but successful fundraiser for Chldren's Education Foundation.

Those who came were lovely and showed a serious interest and asked intelligent thoughtful questions, ate with gusto and enjoyed the evening. On this evening many who attended were lucky not to be in the war, but almost were due to their age, but some of their friends and family were involved. They had an interest in the results of the war and how it affected Vietnam, how its people and government now responded to Americans and the affects of Agent Orange.

Lynette gave a DVD to CEF to use to raise funds. This DVD is fascinating and would particularly be of interest to cyclists '16,000 Feet on A Friday' which is about biking the World's highest paved road 'Ticlio Pass' in Peru. It's scary just watching it as the shear drops are not small ones. Lynette's website is www.galfromdownunder.com

We had the new CEF calendar for 2011 available with the lovely shots Shanti took of the Phuc Le Education Project children, their homes and farmhouses. We still have some available.

Anne Parker gave a small but beautiful contemporary art quilt to CEF. This is still available if anyone is interested. A picture of it is included.

The next event was a wine, cheese and salad evening. Again a similar number of people attended who were mainly Stephen Jackel's friends but also some of those who have become my friends over the years in New York and all showed a very sincere interest. Many on this evening were in education and wanted to know about many aspects of Vietnamese education.

Some of those who came showed an interest to continue to help CEF in some way which was very touching and hugely appreciated. We now have three people committed to work on fundraising together in New York and to help find sponsors for the many children we are asked to help to receive an education. If anyone else is intersted in participating please do get in touch with Stephen or myself.

Stephen was most kind and generous in supporting our work and contributing the use of his apartment and sharing his friends to support children receive an education in Vietnam which was hugely appreciated as without his kindness and support these events would not have taken place even with my determination and enthusiasm to help the children!

Linda or Stephen can be contacted at cef.vn.usa@gmail.com
Posted by Linda at 11:53 AM