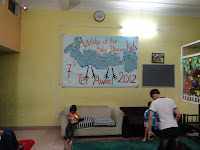 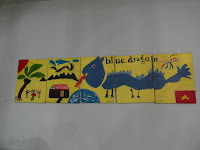 I believe it is encouraging for NGO workers to share the work they do as we can always have something to offer each other.

Last week I visited Blue Dragon Children's Foundation head office in Hanoi. They are a grassroots charity working with kids in crisis throughout Vietnam. Two staff members most generously gave of their time resulting in a very interesting visit. The work they do is most impressive and makes a large difference to many children's lives.

With education at the heart of everything they do, Blue Dragon sets out to transform the lives of the poorest children and families.

Their kids come from many backgrounds, but all are in difficult circumstances and all needing a chance to make a change.

They meet the kids on the streets, at their workplaces, or in their homes and work with them until they can stand on their own feet and live happy, prosperous lives.

"All children have the right to be children: to be safe, to attend school, to play, to be treated with respect, to be heard, to be understood and to be loved."
Posted by Linda at 11:39 PM No comments:

Women's Day - A few thoughts about women and equality in Vietnam

I can't say I have seen equality here amongst the poor, the less poor or the wealthy, but I have seen the beginning of it.

I have some Vietnamese friends who are university educated, speak excellent English, wear modern clothes, work with westerners, and have attended conferences in English overseas, and yet in some ways they haven't changed much.

The young seem very modern, cool and many are very well-dressed with all the mod cons. But when they marry most of them follow the traditions their parents followed; they just don't see that they do.

After marriage they usually have their first child within the first year and a half of marriage. Some put their foot down as they want to wait, but they have to bear incredible pressure from both parents and parents-in-law and will usually give in after two years.

The women work hard here and don't just support their own immediate family, but will often help support and help out their parents-in-law. Before heading off to work and leaving the children with her mother, she may well have to go to her mother-in-laws home, wash her clothes, clean her house, do the shopping and cook two meals for her. When she finishes work she might then cook another meal for her and sweep through her house. Then she will pick up the children, take them home, cook a meal for her husband and clean her house. When she has time off, or before work if she works every day, she will also have to help with the rice, peanut and vegetable growing (unless she lives in a city).

Her husband most likely will have no domestic skills. Most boys have been treated like princes and have rarely done anything to help at home. Some Vietnamese men can cook as their mothers worked and if they wanted to eat they had to cook. Sometimes it was their responsibility to cook a meal for the family as their mother wasn't home until after dinner time.

The difference with the educated Vietnamese from my experience is that most of them have good incomes and less children. Most of them have more choices and do make a much stronger stand when needed than an uneducated girl. They are generally materialistic and want western-style homes and furniture. They want what we have, not realizing we haven't got it right. Some want to leave Vietnam to get away from all the traditions and expectations, but know there is no coming back unless they come back wealthy, and then share the wealth upon their return.

Taoist and Confucius traditions die slowly here. More equality will happen, but maybe not much for another generation, or more.
Posted by Linda at 12:01 AM No comments:

Diem was brave as she came to see us without her mother when we were in her community and asked if we could help her to complete her schooling. She has no father and mum has poor health and has to work when she can. This was a day when mum had to work. Having never met us it would have been quite challenging for Diem to come and ask for help. It showed how much she cared about completing her schooling.

We took her request seriously and thanks to Chris and his couch surfers donations he is able to help Diem complete her schooling!
Posted by Linda at 5:43 AM No comments:

Old toys and books sold to make a donation

I had a very touching email from Michaela, a past donor, with a new donation. She said that the new donation was possible as her children had sold old toys and books. They plan to come and spend some time in Vietnam in the near future too.
Posted by Linda at 12:35 AM No comments: