But a drop in the ocean 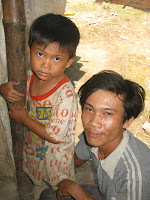 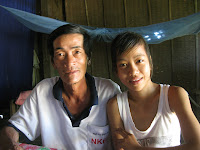 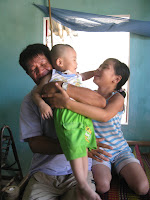 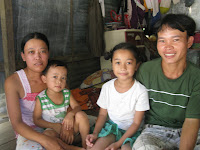 No matter how many children we help by providing the school supplies and the funds to pay all the school costs, there are always more asking and some waiting for a sponsor.

Although I believe that an education makes a big difference to an impoverished Vietnamese childs life, and gives them more opportunities as an adult, as well as being a very useful member of their family and society; it still sounds insignificant that we help a small percentage of those that need help.

"We ourselves feel that what we are doing is just a drop in the ocean. But the ocean would be less because of that missing drop.” - Mother Teresa
Posted by Linda at 10:23 PM No comments:

Nu and Trang can go to school this year 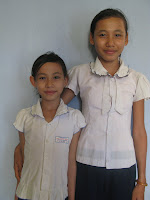 Nu and Trang are sweet, bright girls and their grandmother can not afford to educate them. Now they can return to school and will become educated young women due to two lovely New Zealanders taking on their educational sponsorships.

Their mother died of cancer in 2002 shortly after giving birth to her second child. Their father has remarried and as is often the case in Vietnam, they are not welcome into the new home.

They live with their 70 year old grandmother who has poor health due to war injuries. Although it's difficult for her to walk, she grows some vegetables for their meals. She receives a war pension of $30 from the local government; which is not enough to look after the two girls, let alone send them to school.

Now they have educational support the girls will be able continue their education and be both safe from traffickers, and have a future with many choices.

Making school payment visits fun for the Hoi An children

It must be a rather boring for a child to have to come and sit through a meeting with us about their school costs and wait while their mother or father read the contract. So I decided to turn it into a more enjoyable experience with drawing and games.
Posted by Linda at 8:31 PM No comments:

Those two words 'work permit' may not sound very exciting to most people; but they are for me! Today I picked up my first work permit!

This means I can get a longer work visa; at present that is only a 6 month visa, but it's far better than the 1 or 3 month work visas we can get at present with seriously fluctuating prices. It will save both money and time.

It also means I am here as legally as any westerner can be and consequently feels like a more secure situation. Last year we were all told that if we didn't have a work permit within 3 months we would have to leave. With the threat of that hanging over my head I started the procedures, but it took 14 months because it was essential to have the renewal of my charity papers to be able to do it, but they took 14 months! Very little happens quickly here. So this little blue paper called 'work permit' is certainly meaningful and exciting to me.

These photos are of the children in our Quang Nam sponsorship program. We spent the day at Cua Dai beach, near Hoi An.

It was a real treat for the children; a day for making new friends, eating, having fun, learning water safety and how to float and swim. Everyone who met them on the day commented on what beautiful, sweet and well-behaved children they were.

The photos show them having great fun! They also are of their water safety talk and lessons in floating and swimming with SWIM VIETNAM (www.swimvietnam.com). SWIM VIETNAM has taught 1000 children to swim this year and as approximately 10,000 drown each year in Vietnam, this is nothing but excellent news. They helped make it both an educational and a safe day for the CEF children!

These photos are by Elienne who kindly came along specifically to take photos for CEF. He takes wonderful photos of the same subjects as everyone else, but just from a different angle, making them more interesting! Elienne's website: www.hoianphototour.com

The children said enthusiastically that they would love to have more lessons at the beach next year. If donations allow us to repeat this wonderful experience, not only will we do it for the CEF Quang Nam children, but also for the CEF children in Danang province. 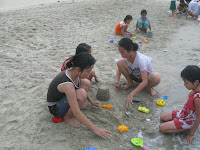 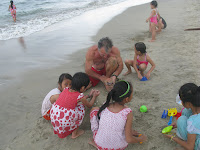 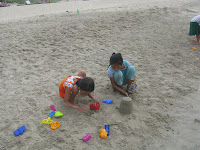 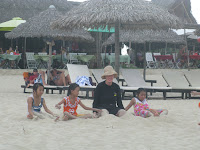 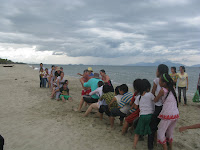 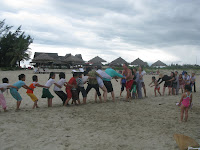 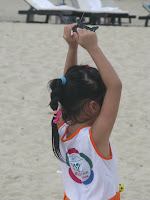 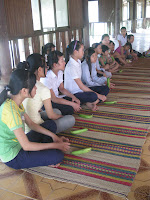 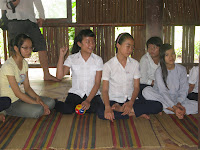 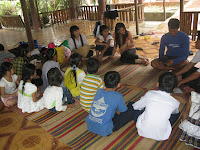 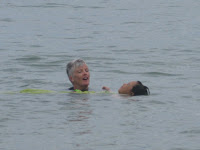 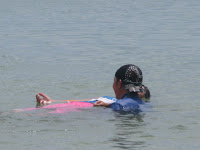 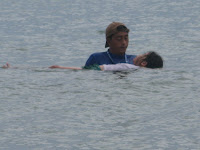 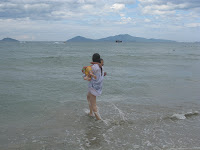 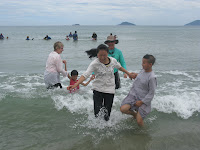 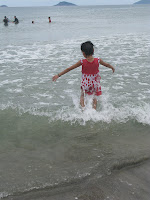 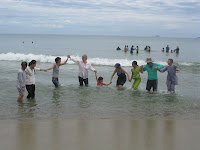 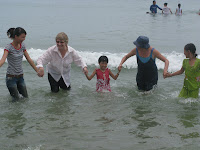 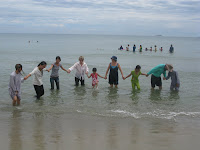 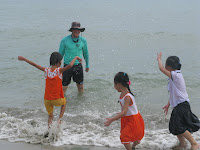 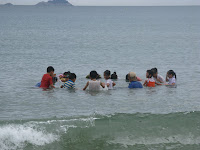 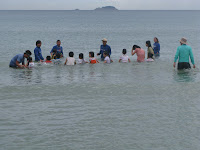 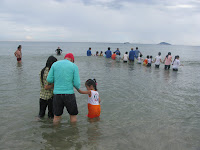 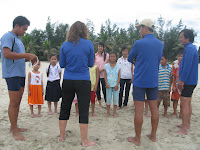 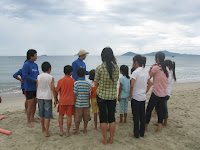 These are photos from our CEF beach outing for the children in our Quang Nam education sponsorship program. We all had a wonderful day; children, staff and helpers!

We started with a group photo early in the day, when we had all the children and some of the volunteers. Then we divided them into two groups; each had a water safety talk, and were given a sheet on water safety. Then they went into the water. The teachers from SWIM VIETNAM were wonderful and slowly got the children used to the water, with getting them to submerge themselves briefly, then submerge themselves for longer, and also got them blowing bubbles in the water. They learnt to float and some learnt to swim.

Three quarters of the children didn't want to go in the water, to the degree they didn't even bring a change of clothes with them. We had all of them in the water, except one girl who would only go in up to her waist. She did have fun playing in the shallow water though. It was understandable as her parents had drowned when she was about ten leaving her responsible for a younger brother and sister. We even had three nuns in the water, two of them fully dressed in their nun clothing!

After the water safety and swimming lessons it was lunch time and we had a lovely meal cooked by Duyen and her staff at Karma Waters.

After lunch our plans went astray! They all wanted to get back in the water! We surrendered as we were outnumbered by far! There was a good reason for the surrender too as several of the children have had water traumas in their lives. One girl had lost her little brother from drowning and two sets of parents had drowned. Also these children don't live near the seaside so this was the first time for most of them to go in the ocean. Considering that about 75% of them didn't want to go in at the start of the day and didn't come with a change of clothes; we were all actually thrilled by this request.

After more submerging, floating and swimming and playing in the water again we did get around to playing some games. We flew kites and we played tug of war. In Vietnam they don't use a rope, they just hold onto people. So the trick is to have the strongest people at the front of each side. It was new for me and fun! We then played a game where we had teams and each team had to fill a large bottle with sea water. The bottle is about 5 metres up the beach. This was hilarious! Several girls realized very quickly that by the time they got to the bottle, most of the water had drained through their fingers. Others realized that it was hard to get it into the narrow-necked bottles. So within about 2 minutes people had found plastic bags and cups, and mouths were filled with sea water. Every one fell about in hysterics.... no one bothered to complete as everyone was cheating!

Then we played football. Our sweet, quiet, polite and gentle girls were wild and vicious including one of the nuns! They too fell about in laughter after a while as it was quite out of hand!

Others played in the sand building sand castles and although we were planning a competition, only the little ones wanted to play with the sand.. so the competition didn't happen.

We finished with sour fruit with salt and rice crackers with chili sauce which are both popular Vietnamese snacks.

It was a great day for all and one of those days I know I will never be able to forget! It was just so wonderful to see so many children who have hard lives,smiling and laughing and having so much fun! It wouldn't have been possible without my amazing CEF staff and my caring, energetic volunteers; both Vietnamese and ex-pat! We were well nourished by Karma waters and it was also a water-safe day due to the life guards, and the swimming teachers of SWIM VIETNAM! Thank you one and all for such an incredible day and for making so many children happy!
Posted by Linda at 6:25 PM 1 comment: