Vy is the last nun we have been helping with an education. Sometimes pagodas have no funds for the school education of the nuns and ask for help from CEF. Sweet Vy has been sponsored for ten years and her help has now completed with her graduating from high school. Now she is moving on to study in a Buddhist College. CEF's Kim Chi shares her story. 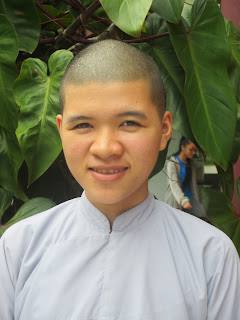 Vy came from a very poor farming family with parents who worked so hard to bring up their three daughters. Her mother used to work in a garment factory and her father on building sites besides growing rice as well as raising ducks and chickens, but they still struggled to make ends meet.
They followed Buddhism and Vy always accompanied them every time they went to the pagoda. The idea of living in the pagoda away from her family came up to Vy as an appealing idea, as she always felt comfortable whenever she was at the pagoda with her parents.  Therefore, Vy decided to leave her family and become a nun.
At the time Vy moved to live in the pagoda, her parents still had to work really hard to keep her sisters in school. One of Vy’s sisters finished grade 10, and soon afterwards married and worked as a factory worker. The other sister completed high school and took a two-year nursing course. She couldn’t find a job after graduation, so married and has two children. She is now living with Vy’s parents, working in a garment factory, earning enough to take responsibility for her two children because her husband lives separately in the North. 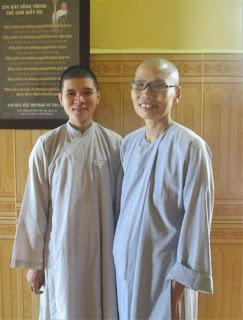 Vy with the head nun of her pagoda 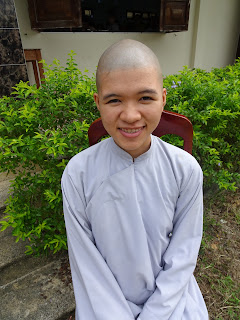 Her father is now 54 years old and her mother 50. Her mother stopped working in the garment factory four years ago to take care of the house and look after the grandchildren so that her sister could work.
Their finances have been better since Vy lived in the pagoda and her sisters went to work. Vy has been living in a pagoda with the head nun, who is very kind and supportive. She allowed Vy to do less chanting than is usually required of just once a day, and learn Buddhism just in the summer holidays. Therefore, Vy had more time to concentrate on her studies, have extra tuition classes and consequently was able to attain quite stable results through the years.
Before CEF helped, the pagoda made incense to sell to cover all costs at the pagoda and Vy’s school fees, but as she got older it was hard to cover those costs and donations at the pagoda were not for education, so they asked if CEF could help to cover her education costs.
Since then CEF helped Vy so that she could continue going to school and reduce the financial burden of the head nun. We helped her from when she was in grade 3 and shortly she is going to complete high school and then she plans to take on further Buddhism studies lasting three years. After that, she wishes to learn about traditional herbal medicine to help the poor and ill.
Posted by Linda at 1:45 AM