Flooding in my home town - Hoi An 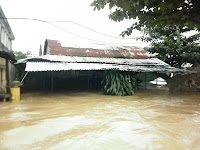 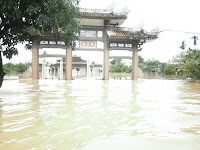 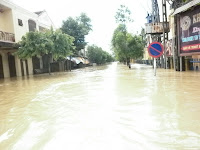 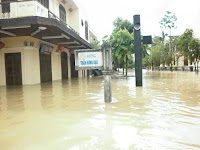 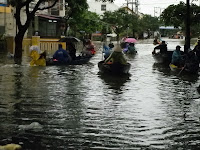 Every year in Quang Nam there is flooding. Some of the worst is in Hoi An where I live. Either there is a small flood or two, or a large one or two; even a small flood affects many and the large ones are very serious resulting in many deaths. This year there were heavy rains for days and serious flooding, as there was two years ago and three years ago, etc. Hoi An residents expect floods yearly and are very adaptable, but still it's a bad situation to have to accept on an annual basis.

Many streets of shops, restaurants and businesses had to shut down for several days due to not being able to access them because of the flooding. They lost very needed incomes.

Two of the families we help had to abandon their homes and move in with relatives in dry areas unaffected by the floods. Many friends were affected; one had 1 1/2 metres of water in her shop, another 1 meter in her restaurant, another had to move out of his home and live in his office. Each of them has mud to get rid of from inside now, they have damaged personal effects and equipment and have now to do repairs and repaint. I was lucky; my house and land have been built up three foot above the level of the path outside my land and only my garden flooded right to the edge of the house.

But for others it was much more serious with their flimsy homes being washed away and 100 plus people have died due to the recent flooding.

From BBC News
...Nguyen Minh Tuan, a disaster officer in Quang Nam, told the BBC Vietnamese service that the province had been hit by four days of flooding. "Quang Nam province gets hit by floods every year. Local people in this area are getting used to living with floods - they have to find a way to adapt," he said..

We who live there don't believe they should have to adapt when money could be spent to change the situation and relieve a large community from unnecessary yearly suffering and more importantly, save many lives each year.