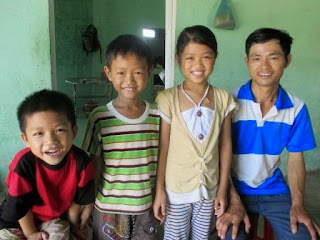 Vy’s mother died last December. Although they knew Vy’s mother had heart disease, she had no treatment because they had no money and they did not understand how serious her health problem was. 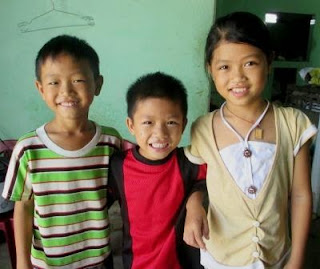 They live in a countryside village where most people work as farmers. If anyone wants to change their life by earning more money they need to go to another city or district to find another job, such as construction work, factory work, tailoring or housekeeping. Vy’s father considered finding a job in a town so that he could manage their daily costs and his children’s education expenses. However, he has no one he can ask to help look after his children. As he is the youngest child in his family and all of his siblings are poor farmers they can’t help. His deceased wife’s relatives live too far from his house to help. Therefore, he has to continue with just farming jobs near home. This allows him to stay near home to do the washing, cooking, cleaning and looking after his children. He sometimes goes fishing at night by using an electric rod. He knows that it‘s very dangerous and not allowed by Government but he needs to feed his family. Life seems so hard for their family but he still feels lucky and happy when he sees the smiles of his children.