The often beautiful countryside of Vietnam masks fearful hazards for young children.  Studded as it is with flooded rice paddies, fish ponds, streams, waterholes and rivers, it can be a wonderful child’s playground; but at the same time a death trap to those unable to adequately care for themselves in an aquatic environment. 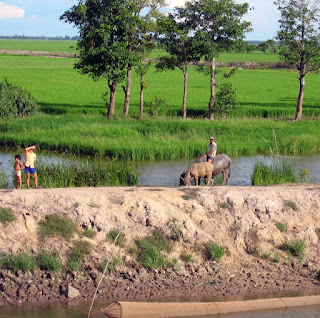 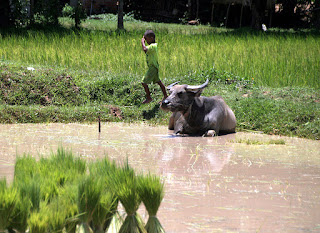 A recent UNICEF report reveals drowning is a leading cause of child death in parts of Asia, including Vietnam, which recorded a staggering annual death rate of nearly 12,000 in 2013.  This represents the death of a child in this way about every 18 minutes during daylight hours.  In addition, a further 12,000 had a near-death drowning experience, many suffering permanent disabilities as a result.
Most drownings and near-drownings for toddlers, aged 1-4 years, occur while mothers or primary caretakers are busy with other chores. These young children are often supervised  by siblings, who are really in need of supervision near water themselves. 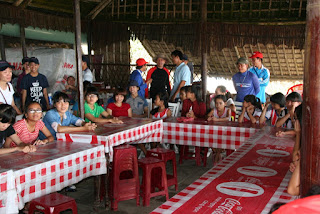 It was with knowledge of statistics like these that CEF embarked several years ago on the initiative to stage an annual 'Water Safety Day' at the beach for all of it’s client children who reside within reasonable reach of the Cua Dai beachfront, near the city of Hoi An.   This is a great outing and an enormous fun day for the kids, many of who live well into the hinterland and rarely, if ever, see the ocean.

However, the underlying purpose of the event is to provide sufficient basic swimming and safe rescue training to afford a degree of self protection for each child; and extending to the benefit of younger siblings and friends who may on occasions be left in their charge.

The UNICEF study revealed that drowning death rates in children 4 years and older who participated in SwimSafe (swimming and safe rescue training) were reduced by more than 90 percent. 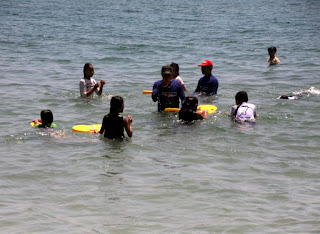 Yet another amazing Water Safety Day was held in brilliant sunshine in early June.  The atmosphere was charged with laughter and squeals of delight as close to 100 children enjoyed the sun and the surf, while at the same time gaining some valuable skills imparted by staff of the local version of the Swimsafe programme, assisted by sunscreen covered CEF staff and volunteers.

Safe to say a lot of tired kids went away happy; but more importantly armed with some skills which may just save a life in the future. 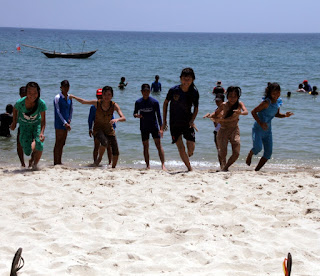 There are of course costs involved in staging this event, feeding the children, transporting them from and to the hinterland etc.  So in 2016 when CEF saddles up again you might like to think about helping with a small contribution.  You might just be helping to save a life.

Note from CEF's Director: One life has already been saved! Soon after one of our Water Safety Days, one CEF child fell into the water and nearly drowned and remembered what they had learned at the Water Safety Day and were able to save their life!
Posted by Linda at 6:12 AM