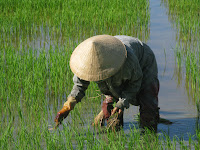 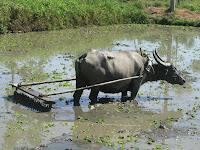 Inflation is affecting every aspect of life here in Vietnam.

My Vietnamese friends especially comment on the cost of food. Food is important to them, not just for sustenance, but a woman shows her skills through her cooking, shows her love for her man and for her children through her delicious food. She also shows respect for her mother-in-law by cooking well for her.

They are not happy when meals have to become simple, minus garnishes, with less variety and less protein. Rice is crucial, the central focus of a meal and the price of it has been increasing year on year making it harder for people to create an appetising meal. More and more people have to buy cheaper, poor quality rice and consequently enjoy their rice less.

I have been on our yearly home visits over the last month and what I have noticed is that the animals are looking more skinny than usual. I was concerned and mentioned it to my assistant-translator and he said, "It is normal now, most animals look very skinny. You can tell the true wealth of a family by their animals. If the animals are well-fed and look healthy the family is well-off. If the animals look like the ones of this family they have a shortage of food and are very poor."

We plan on giving a food allowance to more families this year because a child who is poorly nourished can't concentrate on their schooling and thinks about their hunger instead. A Vietnamese friend of mine used to get hit by her teacher for not concentrating on her school lessons. She said she couldn't concentrate as she was always hungry and weak. When it was time for a school break she and her friends, who were the poorest, would search the grounds of the school and neighbors’ yards for anything edible. In the process she found many plants that were. She was lucky they were!

Anyone who wants to make donations specifically for food please do and make sure we know that donation is for food.

Education costs have increased in some schools by as much as 20%. Schools are also asking parents to pay part of the teachers’ salaries. Schools are taking more classes out of school time and making them compulsory extra tuition. This means that children have to do these classes to receive their education, but they are out of normal school hours and have to be paid for on top of their other school costs. So now this new extra tuition on top of the normal school costs makes education even further beyond the means of the poor.

Understandably, we have had more requests for educational help from many poor people. We apply our criteria, but it is hard to decide who to help and who to refuse. In reality, just about everyone we assess is deserving of some help.

Here are some inflation related quotes from Vietnamese friends and publications. (prices are in Vietnamese dong, VND. One US or Australian dollar is worth about 20, 000 dong)

On BBC Business News:
"The increases in energy, electricity and petroleum indicate that we are going to see inflation get a little worse despite the shift in government policy," said Christian de Guzman of Moody's Investor Group.

GQ Business Report:
Just ask Ngo Thi Bau, the general director of Nguyen Tam Foci Garment, which a Vietnamese consumer magazine for years dubbed one of Vietnam’s 100 strongest brands."This year, plunging revenue has led Bau to lay off 60 percent of her Ho Chi Minh City-based firm’s 400 workers. Her business has been battered by sharply higher consumer prices and the sky-high interest rates – up to 20 percent – that borrowers now face. In May and again in June, food costs surged nearly 30 percent from a year earlier, while transport was up about 20 percent."
Posted by Linda at 9:24 PM