Huynh Thuong collected a second hand bike from us today and ........ 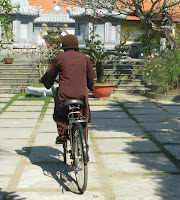 Huynh Thuong collected a second hand bike from us today and ended also being treated to a new top and trousers.

When expats live in Hoi An for a while they get bikes to get around on and when they leave they give them to one of the charities here for us to hand on to those in need of a bike. Ian and Ruth gave us their bikes and Ruth's was collected some weeks ago and today Ian's was collected by Huynh Thuong.

Huynh Thuong is an interesting girl. She lives with her mother, but for some time she lived in a pagoda and was a student nun. She still considers herself a student nun. To keep face she says very little about the situation but we gather that her mother didn't want her to be a nun and cried a lot as she missed her terribly, so Thuong went home out of pity for her mother.

She walks to school and had mentioned that a bike would make it much easier to get to school. So we allocated Ian's bike to her. As she lives a long way from Hoi An it has taken a while for her to get help to collect it.

We met up at Bao Thang Pagoda and the nuns there tried to persuade her to come live and study there. Out of duty to her mother she said nothing. But while she was there a volunteer who makes outfits for nuns whipped up a new Buddhist nun outfit for her. She tried the top on over her other nun clothes and showed us how it fitted perfectly.
Posted by Linda at 12:55 AM