Kieu and Vi both are now sponsored 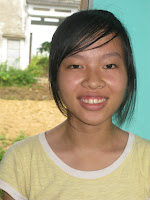 An education for these girls would not be possible without help. Kieu's mother has poor health, works very hard as a rice farmer and makes straw mats when not farming. She still can't earn enough to support and educate her two remaining girls at home. Thuy is sponsored and now Kieu is. This is very good news. Vi's father has terminal cancer. Her mother struggles to make a living selling fruit at the market. Vi's father's medical bills are large and the priority naturally has been trying to get him treatment in the hope of helping him to suffer less and live longer.

They then told me they would like to help more and donated to the food fund and the medical fund! These two funds are new and so this was very helpful. We have found we need to help some of the children with medical issues and some are malnourished and need supplementation as well as more food.

I was overwhelmed by their generosity and thoughtfulness. So many blessings all in one evening!
Posted by Linda at 10:41 PM