The Strength To Go Forward ~ Guest blog by Brian

We generally think of the support provided to the CEF students as being to give them a chance in life that was not afforded to the generation that preceded them.  It come to me on my most recent visit to the students of Phuc Le, that in circumstances where adversity has been particularly cruel, that the same support could well mean the ultimate survival of a whole family.

When I struggled with how to convey this little story, our founder, Linda, provided me with some words of wisdom, which helped set me on the path.  Quote:- “our work is not all fun and joy, there is fear, anxiety and worry for some and there is sadness about some situations.”

The case in point concerns a family that representatives of CEF, myself included, have come to know well from numerous visits over the past eight or nine years.  A family of five; mum, dad, two girls and a boy.  Lovely people; but plagued by mental health issues afflicting the twenty year old son and the father, who suffers from serious memory lapses.

The girls of the family, 'Q' and 'L', are both CEF students.  They have responded to the help provided by producing excellent results and are two of the most promising students in the Phuc Le group.  Q has just completed Year 12 and seems assured of a place at university.

Until recently the mother has been the lynch pin of the family, being the primary bread winner, caring for her son, assisting her husband during his bad times and encouraging and supporting her daughters to do well in their schooling. 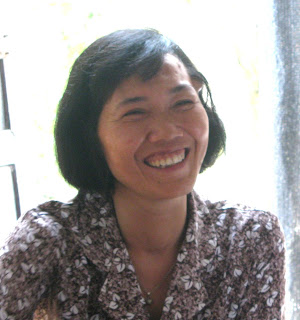 One should never have favorites in the type of role the writer has filled, visiting these families over the years.  But I must confess to having really warmed to this family.  Hence, I became concerned two years ago when informed that Q and L’s mum had a serious health issue; alarmed at the deterioration in her condition last year; and devastated to learn in my visit in June that she had only weeks, if not days to live. 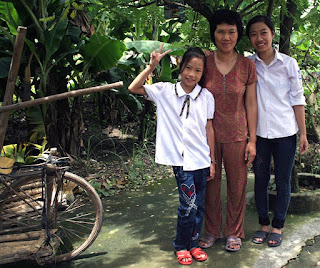 L & Q with mum  ~ May 2014
Whilst I was very affected when invited by the girls to say my goodbyes to their mum, and by the actual experience of doing that, I was subsequently uplifted by the strength shown by those same young women in the face of such cruel circumstances. 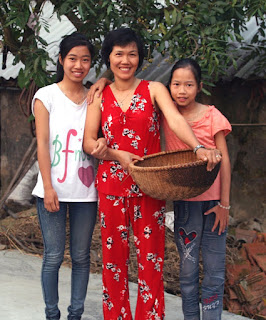 There is the ubiquitous grannie living nearby to assist; however, it is evident that the future of the family now rests in the hands of Quynh and her younger sister.  Were it not for the support rendered by generous CEF sponsors, which will enhance the income earning capacity of these young people, the family would be facing a dire situation.  There will undoubtedly be many hurdles to be overcome; but thanks to you, the sponsors, the family has been endowed with the strength to stay together and carry on.
Posted by Linda at 6:12 AM