This is the first time I joined a meeting between CEF children and their sponsor and it left me with many feelings and impressions. 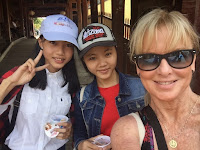 'T' and 'N' are children belonging to our education sponsorship program and they were lucky to have the opportunity to meet their sponsor. Both of them had been so curious that they got up very early in on the morning of the meeting. I picked them up at their house and took them to Hoi An to meet Kerry. All of them felt very happy and gave each other warm hugs. Kerry prepared some lovely gifts for 'T' and 'N' and their younger brother.

From Kerry’s hotel, we started with a short walk into Hoi An old quarter. As both 'T' and 'N'
had never been to Hoi An old town before, they looked around at their new surroundings and were excited to hear about the history of Tan Ky ancient house, the most famous ancient house in Hoi An, and when watching a traditional music performance. All the activities with Kerry gave 'T' and 'N' many new experiences. 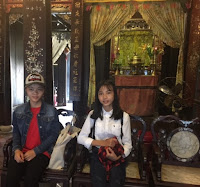 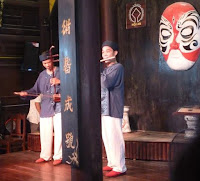 Music and dance performance in Hoi An (Staff photo)

The day was a great time for Kerry and her sponsor children. They were all closer which helped Kerry understand 'T' and 'N' more and vice-versa. Kerry told them many things about her beloved family as well as encouraging them to study hard. Kerry was very happy that 'T' and 'N' were able to communicate a little with her in simple English sentences. Kerry believed that she could have a much closer and better relationship with 'T' and 'N' if she spent time with them and would be able to consider her as one of their caring family’s members.

I, too think that communicating directly, face to face is the best way to understand someone.
Posted by Linda at 1:34 AM